(Photo : Photo by Ethan Miller/Getty Images)
LAS VEGAS, NV – JANUARY 05: A Google logo is shown on a screen during a keynote address by CEO of Huawei Consumer Business Group Richard Yu at CES 2017 at The Venetian Las Vegas on January 5, 2017 in Las Vegas, Nevada. CES, the world’s largest annual consumer technology trade show, runs through January 8 and features 3,800 exhibitors showing off their latest products and services to more than 165,000 attendees.

The slots for these countries were auctioned off, and one of the big winners is Bing, one of Google’s rivals. The options would be available to Android users between Oct. 1 and Dec. 31. 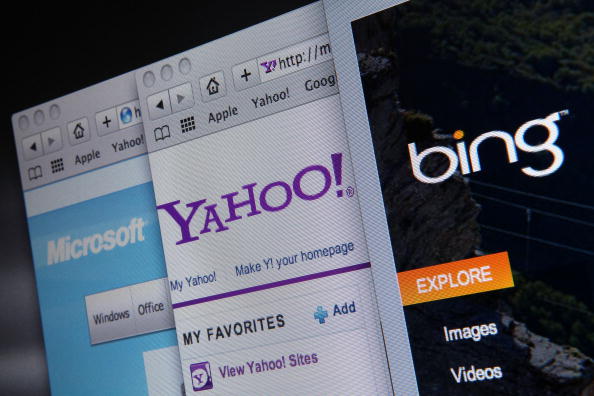 (Photo : Photo Illustration by Justin Sullivan/Getty Images)
SAN ANSELMO, CA – JULY 29: The websites of Bing, Microsoft and Yahoo are displayed on a computer monitor July 29, 2009 in San Anselmo, California. Microsoft and Yahoo have announced a 10-year internet search partnership in an attempt to take away users from search giant Google.

This is currently the biggest news since Microsoft has managed to get its rival product placed in some of Europe’s biggest markets. Bing would be available in Belgium, Austria, Denmark, Finland, France, Germany, Ireland, Italy, Netherlands, Norway, Spain, Sweden, and the United Kingdom.

According to Bloomberg‘s latest report, PrivacyWall, GMX, and Info.com are the big winners of the majority of the slots across Europe.

The new “choice screen” had been available on Android smartphones shipped in the EU since Mar. 1. It is specifically designed to mitigate Google’s search engine monopoly. Previously, Bing lost its slot to DuckDuckGo in the new Android search engine ballot.

Google introduced the choice screen because of an antitrust ruling from the European Union in March, where EU regulators fined the company a record of $5 billion.

They said that Google must stop “illegally tying” its browser and search engine to its mobile OS. On the other hand, the search engines available to new Android users would vary for each EU country, with the slot decided based on a “fourth-price” auction system.

Different companies were willing to pay Google so that users would select their search engine as the default. The highest bidders are then shown to users.

2014 Mainstream Media Doubted Elon Musk Could Make Batteries for 500,000 Tesla Cars in 2020: Here's What Else They Didn't Believe in

Wed Sep 30 , 2020
A recent tweet by @SamTalksTesla details how back in 2014, there was hardly anyone who believed in Elon Musk when he previously declared back in February of that year that he would build a huge GigaFactory that will eventually employ about 6,500 employees and be able to make enough batteries for about […]